Skip to main content
HorseandRiderBooks.com is the storefront for Trafalgar Square Books of North Pomfret, Vermont—a small, privately-owned publisher of fine equestrian books and DVDs, craft books, and selected other titles. Trafalgar Square’s owners, Caroline and Ted Robbins, moved to a farm in North Pomfret—a rural community of around 200 residents, nestled in the hills surrounding the better-known (and larger) town of Woodstock—in the early 1970s, and established the Trafalgar Square offices and warehousing facilities in part of the farmhouse and the barns on the property. The publishing company still thrives, along with horses and Scottish Highland cattle, on the farm today. When you buy books and DVDs from HorseandRiderBooks.com, you buy from the source. You can trust that we believe in what we publish, and we sell what we feel is top-quality equestrian education. We take great pride in our string of motivated, talented authors. These individuals are the movers, shakers, and hard-working professionals—riders, trainers, behaviorists, vets, practitioners, therapists, farriers, and sometimes, just ordinary horse-lovers—who inspire us to include horses as part of our own life and who teach us how to be better friends, caregivers, and educators when interacting with them. Although rich in history and one that has stood the test of time, the horse-and-rider relationship is constantly challenged by our lack of common language, by our instinctual differences, and by the sources that serve to motivate human beings—money, prizes, and fame, for example. Goals and desire are in general positive characteristics, but when taken in concert with the care and training of another living being—in this case, the beautiful and complex horse—we must be constantly aware of the impact of our choices upon him. It is our belief that the Trafalgar Square authors remind us of this responsibility and provide us the tools we need to “reach for the stars” while keeping our feet planted firmly in a grassy field! With their help, we can ride better; teach our horses to perform better; feed them and house them more in accordance to their needs; care for them when they fall ill and help them recover from injury; and above all, treat them in a fair and just manner, as they deserve. It is our honor at Trafalgar Square Books to serve the horse industry to the best of our ability, and to provide horse lovers the world over with beautiful, highly illustrated, well-written books and engaging DVDs to supplement their growth and development as horsemen and women. We hope our books and DVDs help you in your pursuit of a joyful life with horses. 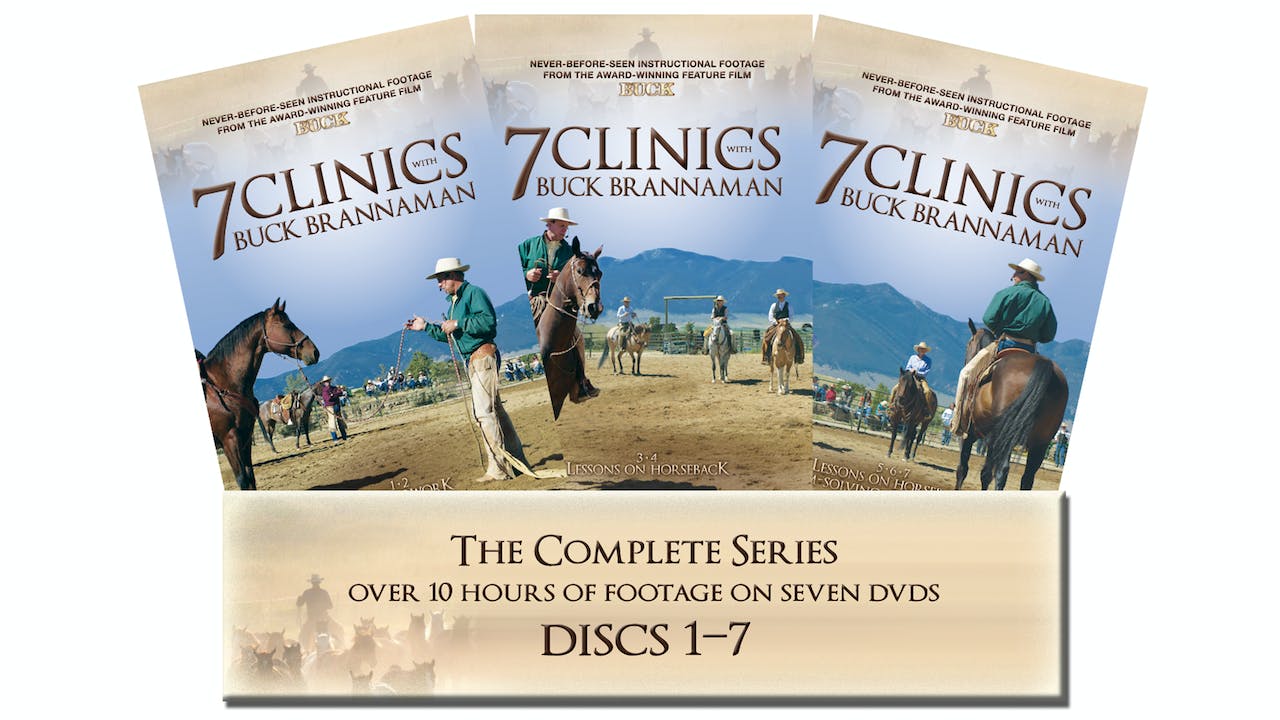 "The biggest challenge in creating the documentary BUCK was taking over 300 hours of footage and cutting it down to 88 minutes," says filmmaker Cindy Meehl. "We still hear audiences saying they didn't want the film to end — they want more Buck!"

Introducing 7 CLINICS WITH BUCK BRANNAMAN, a series of seven videos featuring over 10 hours of instructional footage collected during the making of the award-winning film.

In videos 1 & 2, viewers travel to several Buck Brannaman clinics to learn important groundwork techniques, including: hooking on, leading, halter work, bridling, saddling, backing up, working in circles and half-circles, using the flag, and firming up.

In videos 3 & 4, viewers travel to several clinics to learn some of Buck's most important lessons when working under saddle, including the all-important release, which teaches a soft feel and allows the horse to attain collection and willingly move off the leg. Additional instruction covers rider form and position, riding serpentines, "getting the life up" (finding animation), perfecting the stop, and backing up.

In videos 5, 6, & 7, viewers travel to several clinics to learn more lessons on horseback — such as turn-on-the-haunches, transitions, jumping, and finding the feel — as well as ways to solve problems, including crowding, biting, striking, fidgeting, rushing, anxiousness and sensitivity, and bad attitudes. The series ends with Buck's best advice, tips, and ideas about working with, riding, and training horses — sage knowledge imparted with the dry wit that the world has come to expect of one of the finest horsemen of our time.